Focus on network and information security

Zsolt Nyitrai, Minister of State for Infocommunications of the Ministry of National Development congratulated the newly appointed officials of the European Network and Information Security Agency (ENISA), among them Ferenc Suba, re-elected Vice Chair and representative of CERT Hungary, at a press conference held in Budapest, 23 March 2011.

Minister of State Zsolt Nyitrai announced that experts of the Ministry of National Development have started the preparation of the legislation on network and information security. “This will ensure network infrastructure protection and the security of citizens and e-government services” said Nyitrai. 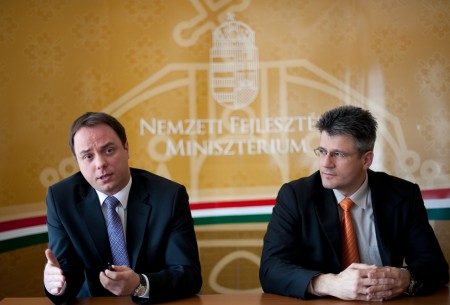 The Minister of State for Infocommunications and President of the Telecommunications Council of the European Union congratulated the newly appointed officials of ENISA, among them Ferenc Suba, the Hungarian member of the Board who was re-elected as Vice Chair at ENISA’s Board Meeting held in Budapest.

Trust and network security are among the priorities of the European ICT agenda. The legislative package elaborated by the European Commission is the backbone of the Hungarian Presidency’s programme. Hungary aims to take forward the legislative proposals on the extension of ENISA’s mandate and the modernisation of the Agency. Key European Union institutions also place great emphasis on the extension of the Agency’s mandate.